In parallel to works on jsreport@1 release we are also improving integration with .NET and c#.

Through time we traced the following problems with them:

After installation you'll find out that several files have been added to the solution. Additionally to the sample report, you'll find also several configuration files and scripts which helps you to adapt jsreport.

You can also see that the local jsreport instance has been downloaded from npm into jsreport/development folder and that it was automatically zipped for production deployment into jsreport/production/jsreport.zip 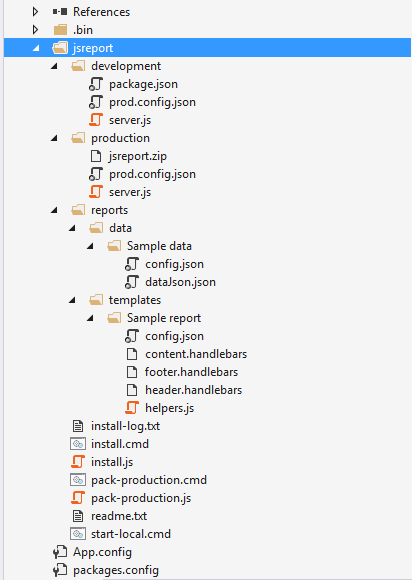 The first step is to run the file start-local.cmd. This will start the local jsreport instance you'll use to develop the report templates. Afterwards you should be able to reach the jsreport studio at http://localhost:3000

My favorite approach now is to open the browser with jsreport studio on one screen (or on one half) and Visual Studio on the second one. Then navigate to the sample template in both VS and studio and try to edit it in the VS. You should see that jsreport automatically monitors changes made in VS studio and refreshes the report output.

This way you can use VS together with jsreport without any VS extension involved and also stick with native jsreport template format. You only need to make sure that all the files you have in jsreport/reports have enabled Copy to Output Directory in the properties.

There is nothing that need to be done for production publishing or deployment. VS should automatically copy the jsreport\production folder as well as jsreport\reports folder to the bin and this is enough.

Invoking the report rendering from c# is then simple as follows.

Alternatively you can use the override which accepts single object completely describing the rendering request. You can find how this object should look like in the jsreport studio API dialog or for example here

Note that initialization of LocalReportingService can take a while for the first run because it needs to unzip the jsreport.zip. Also note LocalReportingService doesn't start any web server as it was with jsreport.Embedded. It simply starts node and output report every time you call render. This should make it reliable and also fast enough.

1. Navigate to jsreport/development and run

2. Edit jsreport/development/prod.config.json and add wkhtmltopdf into the extensions array

3. Edit jsreport/production/prod.config.json and add wkhtmltopdf into the extensions array

4. Navigate to jsreport and run

Now you can use jsreport-wkhtmltopdf in both development studio and production run.

jsreport.Local brings to c# and VS more flexible and more transparent reporting than it was with jsreport.Embedded. You should be able to easily use the whole power of jsreport and custom extensions in more reliable way. Please note this is just pre-release. We would love to get a feedback from you now.